Exquisite high mountain duplex in the town centre of Llívia. The house, 115m2 and recently restored, is ideal to enjoy a few days of relaxation -with friends or family- in one of the most charming regions of the Catalan Pyrenees, La Cerdanya. Restored stone facade, high-level mountain decoration, melis wood flooring, German veka woodwork, large fireplace in the dining room, excellent location in the city centre of Llívia … This beautiful house is the ideal place to enjoy the Pyrenees. It can accommodate up to six people: It has three comfortable rooms with flat screen TV. It has a complete bathroom and a toilet, a fully equipped and recently renovated kitchen. In the generously-sized living room, you have a BT and Netflix music system for guests’ enjoyment. The large fireplace that will make winter nights comfortable and cosy. The house has two entrances, one that overlooks the town centre and the other the countryside, from where you look at a wonderful landscape.

Although it belongs administratively to the province of Girona, Llívia is actually a Catalan island in the French territory. This is due to the Treaty of the Pyrenees, signed between the kingdoms of Philip IV of Spain and Louis XIV of France in 1660. But more than for this fact, Llívia is known for being a top-level tourist destination: both the town and its surroundings give off an intoxicating charm. Located in the heart of the Cerdanya natural region, Llívia offers visitors a wide variety of possibilities during all seasons, both adventure sports (climbing, canyoning) and family activities (bicycle tourism, family canyoning, Nordic walking, etc.). The beauty of the landscapes – outlined by shaped summits, crystalline lakes, forests and high plains -, as well as the purity of the Pyrenean air, invites to follow some of the natural routes that cross the region. A true paradise for hikers and nature lovers. In winter, thanks to its privileged strategic location, Llívia becomes a perfect destination for ski lovers, as it is surrounded by some of the best ski slopes in the Pyrenees, both on the Spanish and French sides: Les Angles, Lles, Puyvalador, La Molina, Porte Puymorens, Ax 3 Domaines, Formiguères, Masella and Font Romeu, among others.

And when it comes to the town, Llívia also offers interesting alternatives: perhaps the most remarkable is the Municipal Museum, which includes the preserved material of the Farmacia Esteva, considered as the oldest pharmacy open to the public in Europe, documented since 1594. Also, the museum hosts an important collection of archaeological material that reviews the history of the entire area. Another cultural visit that we can take advantage of in Llívia is the church of Nuestra Señora de los Ángeles, a construction dating from the 16th century that was built on another temple of the 11th century and from which the materials were used. In the Church we find an exhibition of valuable objects, among them a Christ considered as the most beautiful Romanesque-Gothic transition carving of the XIII-XIV centuries that inspired the famous French author Deodac de Severac his musical composition Las muletiers devant le Cristo de Llivia. Another building that impregnates Llívia with its medieval air is the Bernat de So tower, built between 1584 and 1585 in the context of the rivalry with neighbouring Puigcerdà.

Amazing location right in the center of Llivia, very close to the church. Nice views of the mountains…

December 22, 2019 by David
Amazing location right in the center of Llivia, very close to the church. Nice views of the mountains around. The apartment is very big and nice!! And extremely clean. We enjoyed it a lot, we'll get back really soon!!

Isabelle was nice and helpful. The location is very near to restaurants and supermarkets. Very nice place…

July 1, 2019 by Sami
Isabelle was nice and helpful. The location is very near to restaurants and supermarkets. Very nice place in the old part. 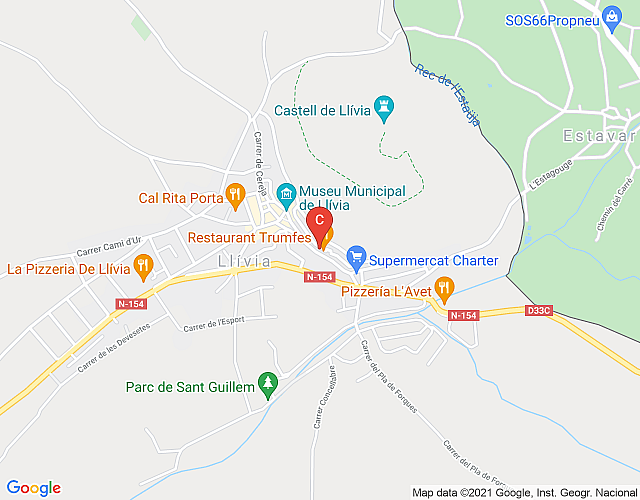 THE BALCONY OF PRULLANS